The next big thing is here

Clubhouse – and just like the man who might have invented fire and is pitching it to his fellows, we don’t know much about it yet. If you didn’t hear about it. Don’t worry we are in the really early adopter trendsetter phase and you have every right to ask yourself „What’s that again?“  T3N put together a what is it that might interest you.

Vogue wrote about it: „Drake, Oprah Winfrey and Virgil Abloh Are Fans: Here’s Everything You Need to Know About Clubhouse…
…

What kind of conversations are being had on Clubhouse?

A dizzying bringing together of live podcast-style conversations, panel discussions, networking opportunities (some savvy people are already swapping ‘influencer’ for ‘moderator’) and advantageous multiple-room use (locked and private options are available so you can talk to pals too), the social-media app mimics real-life interactions.

Launched in April, it’s continuing its global rollout having been valued at an estimated $100 million in May 2020. Recording any conversation is strictly forbidden, meaning your encounters with VIP members or general conversations are protected.

Who created the Clubhouse app?

Developed by Silicon Valley entrepreneur Paul Davison and ex-Google employee Rohan Seth, the app received approximately $12 million in funding from the capital firm Andreessen Horowitz in May and has continued to soar. While the app can only house iPhone users for now, its expansion is imminent (it currently has 600,00 users). A new update means members can leave the app running and listen to conversations while making dinner/ordering from Caviar….“

Personally, I see clubhouse as the democratization of podcasts, summits, and talk(shows). Public but not overcrowded. In another (filter-) bubble of like-minded people given the ability and option to talk. The Spiegel already put this into a negative direction by calling it „an elite circle thinking they are the world“ but I tend to differ here: „It’s such a high quality of people“ 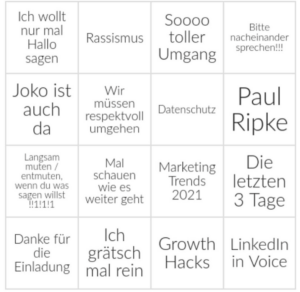 This post of Agentur Boomer probably sums it up rather nicely.

I wanted to get in some of the questions that I read rather often in the last few days and give an opinion on them:

But the is actually a much more interesting question for me:
How can it be monetized? And how can this happen for everyone involved? For the content creators, brands, and of course for Clubhouse itself?

Let’s look into these three, one at a time:

There’s a ton more imaginable for everyone being involved. However, it goes. I am excited to see what’s going to happen. Happy to hear your opinion and feedback on this one – preferably on the LinkedIn Post I will share it with.